This was fancily packaged CD was purchased in the afterglow of one of Benny boy’s rousing sologigs. The new tunes he played on the evening in question were sufficiently memorable and engaging to prompt acquisition. 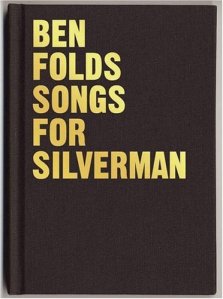 Much of the rambunctiousness of his earlier incarnation has faded, replaced by a somewhat jazzier Joe Jackson/Billy Joel piano-man feel. While I own nothing from those two gentleman (but I am a fan of JJ’s Real Men and Is She really Going Out With Him) it is an ideal format to explore human emotion etc. Of course, it can also be a domain prone to lyrical self-indulgence and keyboard trickery.

Folds delivers some quality songs on this – Trusted, Landed, and Bastard – all break-up tracks yet again. I guess that’s sure to be a common source of inspiration when you keep churning through partners like BF does! Several others are too pedestrian or cringe-worthy – like his ode to his little daughter (Gracie).

I also bought a 7″ off this album in pursuit of one of his live classics – a Dr.Dre cover that is unlikely to be suitable for your workplace (excessive swearing but much hilarity ensues):

Note: The alpabetically inclined among you may be pondering the “B” status of this CD.  It should be in “F”, but is kept alongside his earlier banded incarnation for convenience’s sake.

This entry was posted in B and tagged Ben Folds, CD review, music, music review, Songs for Silverman. Bookmark the permalink.