Several Christmases ago I decided to expand my lovely wife’s musical horizons with a couple of female-vocalled hip-hop albums. There was a decent logic to this, as various rappers had piqued her fancy. 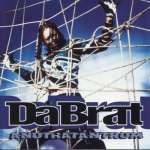 A bit of research saw my secruing works by Missy Elliott and this here 1996 effort from the first woman rapper to have a platinum-selling album.

I’m not sure I’d given it more than a cursory listen until yesterday afternoon.

After several spins, these are my impressions:

– Ms. Brat spits out rhymes at an enviable pace

– She has rather dubious taste in terms of R&B backing tracks (the Bee Gees tribute on here is a big cringefest).

There ain’t that much here that sticks in the head or the behind.

I’m reluctant to diss the Bratstress too much. She is hard, and apparently doing some jail time for assault. She’s also connected, with her half-sister married to the Prime Minister of the Turks and Caicos Islands.

Nevertheless, the search for the stand-out female rapper continues. Any tips?