I’ve been reliving some great moments in music today bopping along to the soulful, powerful pop funk of Ms. Aretha Franklin. 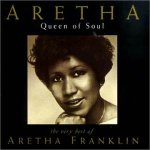 Here’s a lady that pops up again and again with classic tracks that have become unmistakably hers and hers alone.  I guess that makes her the female parallel to James Brown.

This collection has the classics that you’ve heard a million times before (many of the overburdened with parentheses): Respect, I never loved a man (the way that I love you), Chain of fools, (You make me feel like) A natural woman, I say a little prayer, and Do right woman, do right man.

It doesn’t seem that long ago I was reviewing a bunch of pasty Irish actors trying to capture the power of several of these tunes. Hearing them in the original glory highlights what
makes Aretha so special. Her voice is close to flawless, and her vocal pacing is impeccable.

There are a couple of later, more MOR Luther Vandrossy numbers towards the end of this set that do very little for me, but the front half has made me Think that Aretha was very justified in her status as the first female solo artist in the Hall of Fame… the Blues Brothers were right to be a little scared of here too: