Again, I wander back to B for a previously unreviewed download. 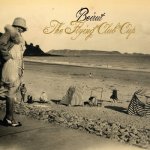 This CD erroneously gets classified as “country” by my consistently inaccurate iTunes.

Perhaps the Apple oompa-loompas got all geographically befuddled, thinking of the band’s name as a nation rather than capital, and then sliding from there to country as a genre.

Surely ‘Fake Balkan Folk’ is a standard section in any respectable record store.

This is a decidedly odd set, coming as it does from some indie lad from New Mexico who fancies himself as a mittleuropean/gypsy type. Thus we are transplanted to some coffee-house in the first half of the 20th century where gentlemen in waistcoats and twirled moustaches squeeze accordions, fiddle…well, fiddles, and parade their polylinguism.

The dude in question, one Zachary Condon (surely he could adopted Zacko Condonoic as a moniker) is clearly an imaginative type, and musically adept. His voice is on the very weak and rather dreary side (not much more toneful than Steve Merritt of the Magnetic Fields). That detracts from the party possibilities with this CD.

I’d be intrigued to see this live. I suspect the cacophony would transfix. On shiny plastic it is not quite on the money however.