As debut albums go, this is one of the standouts in my collection. 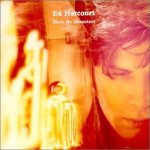 Ed Harcourt sashayed into my life one night at a jazz club in Melbourne around late 2001, hair a-floppy, suit all scruffy.  Looking like some cross between Hugh Grant and Dylan Moran he sat at a piano and belted out a great set of plaintive tunes.

This album showcases much of that material and has been getting a lot of airplay around my way ever since.

Harcourt isn’t much like much else in my collection.  The piano is backed by a wide range of instruments and at times approaches the world of Tom Waits, but he is less discordant.  His voice can tremble and soar like Elliot Smith and Jeff Buckley, but he is less downbeat than the former, and less precious than the latter.

But that’s enough comparisons.  The big deal is that he lays down classic track after classic track. Hanging with the Wrong Crowd, Apple of my Eye, Beneath the Heart of Darkness and Shanghai are all beautifully constructed and executed.  Strangely, he made few clips for them (this one has a very scary feline):

File under: Here be gold