It has been an icon-heavy week around this blog, and here’s a true musical original. 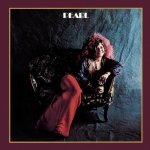 I was introduced to this classic by my lovely spouse, and I am eternally grateful.

Of course, I’d heard Mercedes Benz and Me and Booby McGee before, but never in their natural setting. Appearing alongside eight other bluesy rock gems, they make a hell of a lot more sense.

This album (posthumously released after Joplin ODed during the recording) showcases an artist in her prime belting out some of the most powerful songs you’re ever likely to hear.

Ms. Joplin has an astoundingly engaging and expressive voice. She bends notes and bursts with emotion. The production quality is great, leaving enough space for the vocals to roam free, but with some sensational playing.  The organ work on My Baby, for example, is a real treat.

It is such a shame that Joplin joined the Forever 27 club (i.e. famous musos who died at 27 – the club also includes Robert Johnson) and left no more tunes, but she certainly went out with a huge bang:

File under: Sweet Mother of Pearl