When asked the standard Rockwiz question (First gig attended?), my response is a proud “Paul Simon on his Graceland tour, supported by (and playing with) Ladysmith Black Mambazo”. 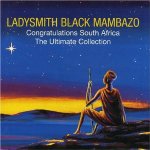 I was wowed both on the album and at the concert by the all-male choir with their harmonies, wooping, stomping and general joy.

The gentlemen in LBM were a wonderful introduction to a continent of exciting music and also captured a mix of anger, pride and optimism that seemed emblematic of the struggle in South Africa.

I was thus excited to see this 2 CD greatest hits collection amongst my wife’s CDs, and pretty disappointed with the content therein.

While there are a couple of the killer tracks from the Graceland album (including a Simon-less Homeless), and several well-paced, soaring Zulu numbers, the albums are overpopulated with their crossover tracks, often awkward cheesy covers and collaborations (with Dolly Parton for example).

I suspect I’m being a complete world music slob, but most attempts to collaborate in such fashions do tend towards the novelty rather than musicality.  Much of the album showcases how much Paul Simon’s immersion in South African music was an exception to prove my rule.