The shift to country-music was not a complete shock, as Kweller has always been one to strap on the acoustic or call for more pedal-steel.

But this album sees him embrace honky-tonk and bluegrass. And what a damn fine hootenanny he throws for us faithful listeners.

BK’s joie de vivre has always been a big chunk of his appeal, and bringing this positive outlook to the country genre is a welcome respite from the ‘my dog died/my truck don’t run’ vibe that weighs down many of the dusty booted balladeers.

This album is chock full of all that is fun and right – trucks, bars, greyhound buses, love going great  – and Kweller seems refreshed and reinvigorated on the songwriting front.

The album opens well with Gypsy Rose, hits hillbilly heights with Fight (that line about aces, faces, 2s and 3s gets me every time), nails Beatlesque skiffle with Sawdust Man, and makes a play for alt-wedding waltz on Things I Like to Do:

What makes this BK’s most satisfying opus (thus far) is that he treats the slower songs with greater care/acumen.  He delivers a track with a chorus perfectly suited for a sitcom about a feisty twenty-something Mary Tyler Moore-type making her way in the big smoke:

File under: BK backed a winner

There is a logic to this the third album in Kweller’s discography being the first self-titled effort, as it is a true solo effort (i.e. he plays every instrument).

Not that you can tell, as he is an adept little multi-instrumentalist.

He doesn’t attempt anything different on this release. If anything he bridges the gap between his energetic debut and more restrained second release.

I have a strong preference for his more up-tempo work.  Tunes such as I Don’t Know Why, Run and the biggest keeper Penny on the Train Track are highly competent power-pop.  The first of those three tracks has a couple of nifty little country riffs that hint at a new direction.

The latter gem is Kweller at his best, and after seeing this video today (featuring his grandma) I’m even more impressed:

The slower stuff on here I find much more hit and miss.  His homage to young love (yet another song titled Thirteen) out Ben Lees that other Ben in its naïve enthusiasm. Other tracks such as Magic and Until I Die are very skip-button worthy.

Earlier this week I caught a screening of 80s teen-vampire flick ‘Lost Boys’ at a rooftop cinema.

All performances by humans/vampires were laughably bad.  The only passable acting was the malamute who played Nanook.

The three such canines on the cover of this album are almost the best things about it.

Kweller abandons much that was exciting about his debut on this CD.  He slows it all down and gets all earnest singer-songwriter. His vulnerable voice is exposed and the songwriting seems rushed and is just too dull.

He does deliver one keeper in the title track, which manages to sound like he’s ad-libbing a series of variations (folk music style) and has a cool line about karate:

When, some time in the distance future, they produce a double aural implant of Benjamin Kweller Esquire’s greatest hits, I’m thinking that’ll be only song from this album you’ll find.

Perhaps he should have covered this song (and hired the sax player – who reportedly played with Tina Turner in the 80s):

File under: It’s my way, or the highway Benny Boy

I encountered mop-haired indie-pop wunderkind Ben Kweller when he was the mysterious third amigo in The Bens (alongside Folds and Lee).* 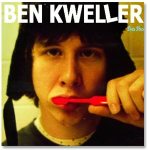 He came across as a nice hybrid of these two and almost every other upbeat, guitar-wielding, power-pop folk-rocker you can imagine.

This debut captures that first experience perfectly.  Ben bashes out eleven happy, slacker-friendly little gems, all guaranteed to have you swaying and jumping and grabbing a tennis racket.

This is Beck without any of the gadgetry, Weezer with no cynicism, the Lemonheads without the opiates.

Ben has a rosy take on the world that is infectious (while not cloying), and an ability to construct songs that seem throwaway but are actually deftly constructed memes you couldn’t ignore if you tried. The pick are Wasted and Ready, Falling, Walk on Me and Commerce, TX:

Anyone think he borrowed a Nirvana riff on this one?

*Alas the Bens never delivered their promised longplayer, and the sole EP (which is a ripper) went unreviewed.

From one Antipodean punk-survivor with an enormous back catalogue but little to show in terms of chart success, to another…

Former Saint Ed Kuepper is a much more mainstream artist than kooky Knox, but his output seems to occur outside the ‘industry’ of music in Australia.

It’s hard to understand why when you listen to this 1996 collect of his best tracks from 1992-1995 (I told you he was prolific).  On a musical Venn diagram Ed sits at some intersection of the Go Betweens, Nick Cave and Dave Graney.

He shares a portion of the flair for the slightly twisted or flawed arty pop of Forster and McLellan, the atmospheric darkness of Cave’s less gothic works, and that irritating  pompous vocal styling that Graney overplays.

There are some wonderful patches of vocal pacing and songwriting on this. I’m With You‘s “fogged up car window pane” is Joplin-esque. La Di Doh is catchier than I’d like, and the opener The Way I Made You Feel is what AOR radio stations should be playing:

At times Kuepper isn’t quite the sum of his parts, and this album lacks a blow you away moment. But when The Church, The Triffids and Died Pretty are winning accolades, so should EK.

File under: Not as intriguing as Winnie, or as refreshing as the beer

I doubt there is a CD in my collection whose purchase and regular playing was so completely prompted by a single song as this effort from one of NZ’s finest songwriters.

Not Given Lightly (the song in question) is one of the most inexplicably moving and engaging tunes etched onto my synapses, and to not own it on CD (I also have it on 7″) would be a crime.

Not Given Lightly is a splendidly raw, catchy and sweet homage to love (and to the associated sexual acts!).  I love that Knox never felt compelled to sweeten the sounds of the track, staying true to his tinny, lo-fi, bedroom recording schtick.

The song is brilliant, and here are two suitably chaotic clips of him playing it live (including some Fauves footage too):

The live versions sum up the spirit of this album perfectly.  Knox often sounds like he’s in the next room, noodling away on some potential work of genius, but with no capacity/desire/urge to hone the output.

But he has an incredible ability to deliver a sufficient kernel of poppiness to keep me listening. Certainly some tracks on here are so transient that you’ll forget you’ve heard them. Voyeur does delight with its falsetto Split Enz-iness, while Rapist is paradoxically the easiest listen on the album.

File under: Play Track 5 on repeat for a day at least

Footnote: Tragically Chris Knox had a stroke in mid-2009 that appears to have left him unable to perform/speak.  He has been honoured with a range of cool tribute events/efforts to raise some cash on his behalf.  This one looks very cool (that’s a hint for anyone looking to buy me a Xmas pressie).

For a period of time I was pretty susceptible to recommendations of unheard acts that were compared to or associated with Melbourne act The Lucksmiths.

This act from Portland, Oregon had toured with said band around the US, and I picked this album as a result (a similar situation lead to my first dalliance with Belle and Sebastian).

It is exactly what you might expect (and what I’d assumed): very softly-softly, sparse tunes.

It is so delicate and twee it almost feels like it’s struggling to be heard over the threatening ambient noise of even a quiet office/loungeroom.

The vocals are slightly warbly and very skinny/cardigan-wearing in tone.  There is an abundance of do-do-do-dos, and the jangly tambourine, treble-dominant guitar lines and lazy bass, yet it never quite nails the catchy, endearing acoustic pop I presume they are searching for.

There are some moments where they do get it pretty right (e.g. Sad City), and they do try to suck up with me by namechecking my hometown (on Melbourne, AU), but all in all this is anemic album unable to sate my appetite for poppy goodness.