Now that’s what I’m talking about!

It has taken four albums, but I’m finally hearing the Zep I expected. Here are the big riffs, the killer tracks that I’ve always associated with these big-haired, snake-hipped gentlemen.

It’s so very hard to argue with an album that opens with Black Dog with its near perfect call and response between lead guitar and vocals, and power-drumming to get anyone bashing the chopsticks on the table.

The fact that Rock & Roll follows immediately justifies the fact we own this album on both CD and LP.  The album understandably tapers off for a little from there on.

I was pleasantly surprised that the much overrated (and belittled) Stairway to Heaven doesn’t sound anywhere near as pompous in its natural setting.  In fact it seems relatively subdued (of course mentioning said song justifies one more cover clip – this time some girly indie-pop):

The album keeps it kicking along with the surprisingly funky Misty Mountain Hop, and then mellows out in the folky Going to California.

Having worked through our personal Zeppelin odyssey, I must declare this the pick of the bunch… and acknowledge Mr. Leonard Teale’s rightful ownership of the best Stairway rendition:

File under: The hep zep

Posted in L, On Vinyl

The discussion of children’s records reminded me I’d missed a J LP.

When flicking through record racks in second-hand stores, I find it very, very hard to resist old vinyl gems like this.

The 1968 Disney film is a very fond memory from my childhood, particularly because of the antics of that big bear Baloo:

That dance with the tree is probably something that wouldn’t get past the prudish studio types these days.

This album, which only has nine tracks pulled straight from the film (dialogue and all), showcases the audacity of this film. It is filled with swinging bebop explorations, skatting, Gilbert & Sullivan-esque nonsense and class commentary, some lovely orchestration and one of the funniest Beatles impersonations you’ll ever hear (as hippie vultures no less).

It is a reminder that Pixar didn’t invent animation that adults could delight in, and that such films can be made without any use of Elton John or Randy Newman.

In the end it all gets down to the sheer brilliance of that big bear, however’… and one ranga I’d definitely vote for:

File under: Forget about your worries and your strife

Some E action before we get to K…

We’re currently watched the new New Orleans based TV series from the ‘Wire’ gang – ‘Treme’ – and rejoicing in its musical focus.  A thrill from episode 4 was the sight of Justin Townes Earle and his facially hirsute pa Steve, playing the role of French Quarter buskers.

In a perfect world, every single person watching the show would have been going ‘there’s Justin’ in the fashion I was.  This young man should be a superstar of the first order.

This, his third album, continues his evolution into a fully fledged member of my country 1st class (i.e. alongside Lucinda, Gillian, Johnny Cash, Steve, Hank…).

While in the past I’ve lauded the ‘olde worlde’ skills of JTE, on this record he strides more confidently into the latter part of the 20th century.  There is much less bluegrass, replaced by warm, occasionally gospel-like tunes.

The title track is a ripper, with a surprisingly upbeat suicidal narrative. There’s a luscious lament to lost love in NZ (Christchurch Girl). And he plays to my love of railway-songs onWorkin’ for the MTA.

To sense the progress the Son-of-Steve has made, check him wandering confidently into R&B land (eventually, the song kicks in at about 1:30 min mark):

JTE’s on his way down under again in March 2011 (for the Golden Plains festival, but hopefully playing sideshows aplenty).  Go see him (I’ll be stalking him in NYC not long after).

File under: The third time’s a charm

Posted in E, On Vinyl

I felt so very cool and ‘in’ when I purchased this slab of vinyl way back when.

Perhaps my first ‘alternative’ album purchase was The The’s “Infected”. I spent many many hours playing and replaying said cassette, and said band’s debut, “Soul Mining”.

Of course, The The was at that stage just one somewhat surly man, Matt Johnson – the thinking fan’s ‘MJ’.

So, securing this ‘hard to find’ earlier solo release had me feeling like I’d snuck into some illusive, elite club.

Legend has it that Johnno recorded and tinkered with this opus after hours while teaboy in a studio. It is damn impressive in such a context, as it is a highly complex, multilayered soundscape built around innovative tape loops and effects.

Matt went on to develop these skills and techniques in his The The incarnation. The later works were much more listenable and enjoyable.

This collection is more daunting. Lyrically his embryonic status is still impressive and expressive. Musically the industrial/psychedlic adventuring is more jarring and overwhelming than need be.

There is so much promise and prescience in this record (with the benefit of hindsight), but it isn’t the obvious entry point for a newbie.

File under: A testing taster

Note to self – check vinyl collection more regularly.  Here’s one that should have been reviewed before Etta.

Another dalliance from my NME-reading years was this brief flirtation with the mop-haired British band James.

This record is the 1991 version of their third album, including their hugest song, the very stadium-friendly Sit Down:

That tune has always worked for me, although as a guilty pleasure, in that it is the aural equivalent of a rom-com.  It is manipulative and cheesy, but I involuntarily can’t avert my eyes/ears. The drums are over-amped (and over-echoed), while the chorus and sentiment shouldn’t be scrutinised too closely.

These guys are much more like Simple Minds or Flock of Seagulls (that’s a bad thing!) than the tastemakers at NME were willing to acknowledge.  Sit Down is the least pompous and over-produced track on here.  Much of the material says the band sounding even more U2-like in their pontificating and art-school posturing.

The only really joy of doing this review is discovering from the vid above that lead singer Tim Booth could be Mats Wilander’s doppelgänger… and hoping that whoever was blowing that plastic horn intermittently through the performance subsequently suffered some debilitating and drawn-out toxic reaction to said plastic.

For a brief period in late 1989 and early 1990, I was a card-carrying member of the Madchester mob.

Egged on by NME and RRR’s “New, Used & Abused” programme, I faithfully acquired LPs, 12″s and even t-shirts from a raft of British bands fronted by moptopped types.

While my first love was definitely the Stone Roses lads, the work of The Inspiral Carpets left a greater impression than most of their other contemporaries.

I point the finger of blame at Clint Boon, the guy squelching away on the organ and lifting each track into a more vital and exciting place than they probably would be if solely reliant on the more typical guitars etc.

Having said that, lead singer Tom Hingley has a voice very well suited to this genre, and he plays off against said organ lines very well.

The passage of time has not harmed the aural power of this album, and I’ve relished the revisit… but looking at this video-clip I do question what I was thinking when I thought these guys had some sort of sartorial smarts:

Perhaps they were taking fashion tips from the great Emo Phillips:

File under: Life with a pudding bowl haircut

Posted in I, On Vinyl

Where would the world of røck and röll müsic be without the trusty umlaut? Much heavy and death metal might never have happened. 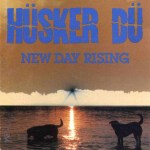 Of course, the doubly umlauted lads of Hüsker Dü were not long-haired, lycraed up pose rockers, but they did reportedly add the umlauts in honour of the mark’s musical heritage.

Like many who arrived late on the scene, I fell for the Dü-esters because of that Don’t Want to Know if You Are Lonely track, which isn’t here. The vibe is, however, with buzz-heavy guitars, a cracking pace, and often-competing vocals.

I gave this album a couple of listens on a Friday afternoon, and it works perfectly as a energy-boosting, caffeine like jolt to the system.  This is such a chronicle of how powerful, and at the same time melodic, various indie bands of the mid-t0late 80s could be (think REM, The Replacements, Dinosaur Jr).

Punk plus melody = these guys.  Check out the title track (plus a later career goodie) – this is a band I wish I’d seen live (Bob Mould didn’t cut it 15+ years later):

File under: Not a bad moon in sight

Posted in H, On Vinyl