Artist: Arcade Fire
Venue: Sidney Myer Music Bowl, Victoria, Australia (in the somewhat elite seated section – not that we sat down)
Date: Wednesday, 21 January, 2014
Who?: The amorphous ensemble from up Quebec way with a huge indie/crossover following, a big equipment haulage budget, and a welcome desire to dazzle.
Crowd?: Thousands of adoring folks with about 30% beards and lots of skinny jeans.
Best Bits: The aforementioned razzle dazzle, human bobblehead costumes, about three absolute killer tracks.
Could be Better: Heavier basslines, better mix (percussion was too muted), perhaps less cowbell.
Dream Venue: At a festival where they had to tighten up the setlist
Dream Lineup: I’m thinking Echo & the Bunnymen, Bright Eyes… and reformed Canadian gag-popsters Corkie and the Juice Pigs:

Worth a Second Look?: At a festival, yes. At this price solo, nah, probably not.
Give us a look: OK, here’s 67 mins of action (Win wore the same jacket last night)

I never had a Bob Marley phase.  As a relatively straight-laced teen, I didn’t embrace the ganja, nor pretend to dig Jah.

And the only Haile Selassie I’ve ever worshiped had a ‘Gebre’ in his name and was renowned for his running track action.

So, I came to this CD from my wife’s deep, dark history with no reminiscence. And it’s a bit of a surprise.

The album contains none of the tracks I associate with the dreadlocked one.  Indeed, it’s not even as reggae as I expected.  Sure, there’s a bit of the swinging basslines, low tempo, and offbeat guitar rhythms.  And with the requisite drug references:

But vocally, Bob often also  veers into a more soulful space. And the album is all the better for it.  By playing in a genre I have more of a feel for, I have a much great appreciation of Mr Marley’s vocal capabilities and musical sensibilities.

And looking ahead I can see my next album is chockablock with the Marley standards.

Our collection is smattered with CDs reflective my wife’s heritage.  This is a collection of tunes from her birthplace – Zimbabwe –  from that country’s most prominent musician.

This is a compilation of tracks from across various albums.  Mapfumo originated Chimurenga – struggle music.

It’s all sung in the Shona language, so I can’t say much about the content (beyond what I’ve read in the brief liner notes).  But, he’s done enough to piss Mugabe off and be forced into exile.

Musically, the tracks are distinctly Zimbabwean, built as they are around mbiras (those funky little thumb piano thingies).  The rhythms are hypnotic, and Mapfumo vocal style is similarly enveloping with a strong rhythmic drive.

At times, he steps over into the reggae space with ease (as this video captures, this matches up very well with his look too):

For struggle music, this is extremely pleasant listening.

File under: Embrace it bro

I do try and adhere to my ‘judge an album in isolation’ rule.  This means that comparisons to other releases from an artist should be avoided.

But it’s hard. When I press play I have some preconceptions as to what a band is capable of.  And when those expectations aren’t meant it does affect my perception.

This album is certainly a case in point. This folk act who I encountered first at Port Fairy, then again in Copenhagen, played rollicking bluegrass live and also on an EP I play quite regularly.

But this full-lengther is slow, slickly produced with a very full, alt-country-lite sound.  And it just doesn’t gel with me as I crave the energy and playfulness of what I know this band is/was capable of.

And, again, this album also suffers from the best two tracks being covers of classic tunes – Satisfied Mind and Come as you are.  Certainly they are superb renditions that sit comfortably with the overall collection but it all feels too safe and slightly ponderous.

File under: A road too far

Artist: Ben Caplan & the Casual Smokers
Venue: Northcote Social Club, Northcote, Victoria, Australia
Date: Friday, 3 January, 2014
Who?: A facially hirsute Canadian with a huge gravelly voice, strumming stuff and occasionally bashing keys backed by violin, stand-up bass and drums.
Crowd?: A couple of hundred appreciative inner-city types (and one annoying couple who eventually got asked to leave).
Best Bits: The astounding voice- sure there is a Tom Waits aspect, but the lungs are bigger, the melodies more eagerly pursued. The whole gypsy/folk vibe sans pretense.
Could be Better: I was keen on hearing his Fairytale of New York cover.
Dream Venue: A riverboat, a galleon, a medieval marketplace
Dream Lineup: With fellow Canadian Serena Ryder, the also gravelly Ben Weaver… and the cast of Fiddler on the Roof.
Worth a Second Look?: Absolutely.  If you’re in Sydney catch him on Wednesday.
Give us a look:

As solo releases from pretty beloved frontmen go, this one from Pavement alum Malkmus is relatively unusual. It doesn’t suck.

Stephen stays in relatively familiar territory, with loads of quirky, intelligent lyrics, poppy angular guitar work and playful rhythms.   There is no strong attempt to do it differently from what worked so well for Pavement for their first few albums.  The sounds isn’t pared back particularly.

If anything, Malkmus comes across as less deliberately obtuse here.  There is a stronger sense of story-telling.  The stories are somewhat nonsensical at times, and several might be viewed as eggheady, delving as he does into colonial military parodies, classical architecture references and an epic pirate tale:

It all hangs together startlingly well, however. It somehow makes sense as he jumps from a Yul Brunner tribute, to tales of the Pacific Northwest, and a teenager dating an aging coverband frontman with a fondness for frisbee and Dire Straits.

There is a palpable sense of ease and enjoyment on this album.  A man relieved of pressure he presumably no longer wanted making music that amuses him, and entertains me.

File under: Following the right (foot)path

Another (relatively recent) purchase in need of a ‘catch up’ review.

Kasey Chambers is definitely a guilty pleasure around here, and when she released an album of covers I was intrigued.

The collection reveals a few lessons.

1. Chambers has excellent musical taste.  It’s hard to argue with the Gram Parsons, Lucinda Williams, Steve Earle, Paul Kelly, Fred Eaglesmith and Gillian Welch selections (in terms of both artist and song choices). Hearing Earle’s Nothing but a child and Kelly’s Everything’s turning to white with a female voice does add something new to their respective narratives and vibes.

2. She has a decent contacts list, with Kelly and Jimmy Barnes popping in to duet (Kelly very well, Barnesy not so much).

3. While some tunes are excellent reinterpretations, or at least decent homages, in the end it still feels like a diversion from her core business of penning original tunes that intrigue and excite.  Sure it’d be great fun to pop into her regular gigs down the road from her house where she has a covers band, it still doesn’t stack up against the ‘real thing’ (her music, or the originals of said tunes).

So add KC to the growing list of overdue new albums.

Popping out of the Ms for a couple of reviews of purchases that post-date their respective letter.

Not too many albums on here are Grammy winners.  I don’t to buy much from bands who appeal to crusty industry folks.

But this album did win Best Rock Album. Like so many actors and directors who get an award for the film after their really good performances, this opus doesn’t quite reach the heights of my fave Rubber Factory. But it’s the best output from their evolved fuller band, Dangermouse-produced selves.

This already confident band strides through this recording with Kanye-like swagger. They draw upon a greater breadth of styles from across their career, and on one track take the slow-loud blues approach to perhaps it’s eternal apex.

The tune in question is Little Black Submarine which kicks off like a Jack White number and seems to be staying in that heartfelt troubador space for the opening minute before naturally build to a whole new wig out space.  In the end, it’s stunning that it is only a 3:32 track:

I find myself returning to this album very regularly, probably as often as Rubber Factory, which says a lot for its chops.  Here’s to the long-awaited 2014 release.

It’s not a great sign when the best track on an album relies heavily on a guest vocalist. Discuss… 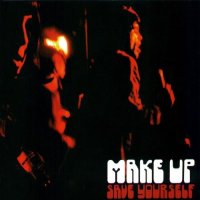 It’s also not a great sign when the best track on an album is a cover version… of a rock standard. Discuss…

OK, now that you’re all back, I’ll argue that is somewhat of a problem with this here final album from Make Up (note ongoing subtle name changes).

The track in question is Hey Joe and it closes out the album.  It is a fantastic rambling 7 minute plus version of this classic, with some luscious lead vocals by someone called Heather Worley (Google tells me nothing about her!).

Strangely, it is the most Make-Up of all the songs on the album, with some strong vocal interactions, a fierce groove, a pounding rhythm break mid-song and the appropriate level of hysterics.

Alas, the rest of the album doesn’t have that vibe.  The band appears to have abandoned much of the ‘gospel yeah yeah’ sound they’d espoused on previous recordings.  Instead we are left with an album that feels like a (less indulgent) Jon Spencer Blues Explosion album.  That’s not necessarily a bad thing, but it renders this my least played release from this combo.

File under: Save some dough and buy their other albums first

I’m a fan of an album that really needs to be listened to in one hit.

This second studio effort from the funkiest white Washingtonians fits that bill from intro to outro.  It also captures the essence of this band incredibly well.

This is a band that loves a groove, a screamed plea and maintaining a vibe.

Frontman Ian Svenonius continues to destroy his vocal chords with exaberated exhortations bemoaning his romantic treatment, while invited as all along for his gospel music rides.  If there is a church somewhere that presents the righteous message in just such a format then I might well get out of bed one Sunday morning, don a natty suit and mosey on down (conscious of likely lightening strikes).

The album is not quite perfect.  It curiously loses a little momentum and energy in the back half,  (what I suspect might well be ‘side 2’ on any vinyl version), with a groove ever so slightly on the somnolent side.  Nevertheless, I feel Live in the Rhythm Hive:

File under: Make-up your Mind